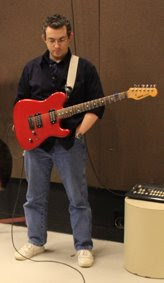 
Dimaension X (located in central Massachusetts), formed in 1991 by multi-instrumentalist Dave Lanciani, is an instrumental band that fuses elements of heavy metal, space rock, and jazz-rock fusion. In Dimaension X, Lanciani (currently) records and plays all instruments entirely on his own. Additionally, Lanciani has collaborated with several bands via the internet, and is currently collaborating on a multi-media CD project with a comic illustrator. He has been playing guitar longer than any other instrument, and is completely self-taught in all other instruments (bass, keyboards, and drums). He cannot read or write formal music notation, but does use some simple music theory, such as modal improvisation, chord structures and progressions from major/minor keys.

Music Style
Dimaension X's music combines electronic elements, such as arpeggiated synthesizers and ambient pads, with extreme heavy metal elements, such as blast-beats, double-bass drums, and heavily distorted tremolo picked guitar riffs, and jazz-rock fusion elements such as extended guitar or keyboard solos, drum solos, ostinato bass lines, and improvisation. He has also begun to incorporate string and brass sections from classical music, along with timpani drums and other orchestral percussion.
His most recent project involves working with a live rock band, creating new, all original music. Stylistically somewhere between the Sex Pistols, Entombed, early Judas Priest and Motorhead, this new (as-of-yet unnamed) band plans on getting a few live gigs under their belt and recording a demo for local distribution.

Word/Phrase Composition Technique
Dimaension X is also known to have created his own method of music composition, using techniques similar to serialism or the twelve-tone technique. Known as "Word/Phrase Composition", notes or chord progressions are "randomly" created from words and phrases. Each letter of the alphabet corresponds to a musical note, octave root, or rest/space/sustain. The notes are used as a "starting point", and are not necessarily the final choices for chord progressions or basslines/riffs.
The following chart outlines the basic alphabetic letter/note relationship:
A B C D E F G H I J K L M N O P Q R S T U V W X Y Z
A B C D E F G A - A B C D E F G A - A B C D E F G A
(the 2nd A would be the higher octave root note, the dash " - " would be no note, therefore a rest or sustain of the former note) The name "Lanciani" would create the following note choices:
L A N C I A N I
C A E C - A E -
Therefore, a chord progression of C, Am7, Em, C may be used in a song, or perhaps the notes C,A,E,C, (rest), A, E (rest) would be used as a bassline for a solo section. The actual use is entirely up to the composer, along with the music style. The notes/chords are merely meant to be used as a "jump-start" to get the creative "juices" flowing. The rest is up to the individuality of the composer.
Many of the albums in the discography were composed in this method, including "Bryson's Universe", "Deus Fetor Pt.2", and most of "Leprosia Doom". 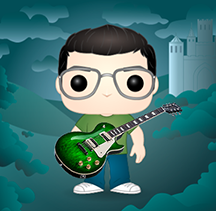 LINX to my Allies